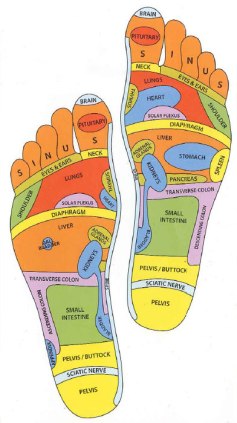 I’m confident in saying that he would not have chosen to do this for a living.  Massaging feet was not the worst thing in the world, once you got into it, although it wasn’t what dreams are made of.  A handful of warm oil to soften the skin, kneading the balls of the feet like dried and cracked pieces of clay.  Pushing the flat of your thumbs from hardened heel and along the arch towards the hammered toes.  It was a rhythmic pattern that he followed, each foot taking no longer than ten minutes. His customers never complained or for that matter, if ever, complimented his efforts. He didn’t mind, conversation wasn’t part of the service.

On the night in question, two junior doctors stood by a coffee machine discussing one of the nurses who was apparently an amature body builder. Their imaginations ran wild on a mixture of sleep deprivation and caffeine.  The discussion had been cut short when a consultant knocked loudly on a nearby door frame to get their attention. They had looked round to see the familiar face of a tall black doctor in a red bow tie beckon them towards his office.  They immediately scurried towards him like trained dogs on speed, dropping half filled white plastic cups of cheap coffee into a black sack marked, ‘No fluids.’

“Thank you for your study results gentlemen. They were late, but thank you all the same,” the Bow Tie man had said.
The juniors had nodded and accepted the half compliment happily.
“I can see that we have some promising figures, what would you say are the factors behind this? asked the consultant.
The mute juniors looked at each other for a moment, and then simultaneously, opened their coffee tinted mouths to speak the first words that came to mind, just to fill a silence.

Elsewhere someone was thinking that pushing your oiled fingers through the gaps in people’s toes really felt quite nice. It was certainly sexual, a nice build up to what he was really good at.
“That’s your feet done Paul, do you have time for something extra?” he had asked.
The silence was always a cue in his mind that an extra was required, also the foot massage always seemed to settle the client’s mind.
“Let’s see what we have here my lovely boy,” he most likely said, lifting the beautiful white material.  Taking the limp cock in his hand he stroked it like a sleeping puppy.  The balls were relaxed and warm, the sack loose, allowing his fingers to stretch the skin to extremes.  He took the head of the cock between his thumb and forefinger, lowered his mouth and slid his tongue under the foreskin and circled the purple bulb. He exhaled deeply and close his eyes.  Sucking cocks was such a bonus for him than just rubbing feet.  He tried to swallow the limp naked little pup, but its length a real challenge even to an expert like him.  Whilst pushing his face into the teenager’s soft pubic hair he reached into his pocket and found the whisper thin friend that would take them both to another level.

“I, we, I mean, cannot give a precise assessment on the increased figures Sir, they are, however, good news wouldn’t you say?” Junior doctor one stammered when pressed for an answer.
The consultant rubbed the back of this neck. His bow tie moving back and forth as he did so, giving it a comical life of its own.
It is recorded somewhere that he responded by saying, “Good news is a false concept, along with luck and accidents gentlemen.  If something changes, there is a reason, and from that we can learn and improve our understanding.  There is little point in telling the relative of a patient their loved one is improving by announcing it as ‘good news.’  What happens when they ask why?  You’ll be left standing on the ward with your damn cock in your hand, that’s what will happen!”
The juniors internally sniggered like school boys.  Mr. Bow Tie looked over his glasses and famously announced “Seek and ye shall find you pair of idiots, seek, and ye shall find”

He averaged six blow jobs a day, and having so many people in one place just hanging around, there was always a customer to hand, as it were.  He saw himself as providing a specialist service. He certainly didn’t do it for the money.  He did have one long-term client to see before that infamous day was over.  It started with a foot massage as usual, however, this being one of his regulars he would take his time and go the extra mile.

The two juniors, as we now know them, had worked tirelessly long after their shift. Fortunately the hospital had switched to recording information on electronic tablets some time ago so data interrogation was somewhat easier that trawling through filing cabinets.  It was the younger one of the juniors that found the link to the Bow Tie man’s task.
“It appears that since we introduced additional one on one care, the organ degeneration slows, and in some cases records show renewed alert functionality,  how can that be?” Junior number one asked  Junior number two checked the data twice. His colleague was right, the data was conclusive.
“So providing Reiki foot massage helps keep the coma patients from deterioration, that’s amazing!  We need to observe this,” he would recall saying.

Working in a hospital allowed access to a never ending supply of latex gloves and lube; life was good he thought.  Old Fred had been in a coma for just under 6 months. He had his own teeth and sported a number of saucy tattoos from his naval days.  He had a big cock, which when approached correctly would later produce some functionality.  The gloves and lube was the right approach for old Fred.  Being attached to a colostomy bag allowed clean and easy access to Fred’s rectum, and being in a coma meant he was relaxed.  With two lubed fingers deep in his client’s arse the masseuse could easily feel the 70 year old’s enlarged prostate gland.  Very slowly he would push and press the walnut sized soft tissue.  The cock normally would move in coma patients, but that didn’t matter, he could almost swallow the flaccid snake to the point of choking.  His gag reflex would hold off when he pulsed with his throat in tandem with his two fingers.

The coma ward was empty of people on that eventful evening, apart from the duty nurse with big muscles sitting at her desk under a circle of light from a lamp.  She remembered looking up and examining the junior doctors.
“Mind if we look around?” said one of them.
“Knock yourself out doctor, it’s rock and roll down here 24/7,” she may have said sarcastically.
They didn’t bother going into the private rooms, just peeked through the glass porthole in the doors.  Each room was the same, a window, a bed, a person and a computer screen displaying information.  In turn they looked in, walked, looked in, walked, looked in, and stopped.

He would have felt Fred swell slightly, there was life in the old sea dog!  He pressed and sucked vigorously, oblivious to the two faces at the porthole.  There was a familiar taste in his mouth, metallic, it was coming. He was coming.  With a steady flow, Fred released a large quantity of semen into our guardian angel’s mouth, just as two junior doctors fell through the door landing in a heap on the polished floor.

There was no doubt, the foot masseuse had been sucking the patient’s cock.  Junior one remembered the guy opening his mouth to speak but only managing to spill the cream coloured fluid down his chin and into his lap.  Junior two turned and threw up in the waste bin, whist Junior one looked back and forth between the guy with two fingers embedded in the patient’s arse and what appeared to be a possible smirk on victim’s face.

Despite the unorthodox behaviour of the Reiki practitioner, not to say the illegal content of his actions, the results could not be overlooked.  The university hospital received further funding based on its findings and the amazing results spurned a dozen published papers.  Mr Bow Tie man much later stood above his seated peers having received formal recognition of his department’s excellent work with coma patients.  He was in the final stages of his address when he reportedly closed by saying,
“It is one of the oldest professions known to man that has brought me here today to accept this award for advancement into coma care and recovery.  It would be wrong for me to take credit for the revolutionary service that has been provided by the lowliest of individulas, and has been practiced by so many people on their knees in the back alleys and under the guise of private services for centuries.

“Ladies and Gentleman, a toast! To Chinese Foot Massage.”
“To feet!” they replied in chorus. “To feet!”