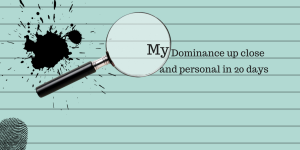 So behind due to lack of available time; and so another a double day entry!

Not much has really happened to keep me away from writing, however, yesterday was spent mainly sitting in a college canteen waiting for our youngest daughter to complete an admissions interview. This is just in case her exam results in August are not sufficient to get her into the university she wants.  It was an interesting experience watching and listening to young people in their natural habitat. I did feel a bit like David Attenborough in Blue Planet watching the mating habits of young gorillas and the prowling patterns of some young female lions.  On a number of occasions I found myself wondering what I would have been like if I had chosen an academic path like those sitting before me.  I was interrupted when a young lad threw himself down next to me in an adjoining chair, spilt some of his coffee too close to my ipad and said, “Hi Dad!”  Yes, this was actually one of my sons who had spied me out during his break in lectures.  He didn’t look any different to many of the other young men in the canteen area; a good camouflage I thought!  He chatted to me for a while, pretended badly not to look at a couple of girls buttocks as they wiggled past, and then he disappeared into the educational under growth.  So what would I have been like in this environment?  Part of me says I would be having sex with every girl that would agree to it, when in reality I’m not sure I would be.  Sexual enlightenment hadn’t reached me at 16 years of age, a sexual experience yes, enlightenment, definitely no.

I don’t think that happened until I was in my early 30s.  A lady who I worked with made very strong sexual advances towards me, however, I didn’t find her attractive. That’s not to say she wasn’t attractive in many ways, just not the way I wanted.  It became clear she wanted a project, and by project that meant testing me and asking questions.  It didn’t help that the lady was very sexual in everything she did and I liked her a lot. She leaked sexual hormones.  Her husband was a UK champion cyclist and could have sex 3 or 4 times in succession, he was a very fit fellow, and needed to be with a wife like that!  My enlightenment came one day in a shopping centre whilst sitting drinking coffee. She asked me if I thought I was attractive?  I did my usual deflective response to an awkward question, and yet she pushed for an answer. I think I said that I didn’t consider myself to be unattractive; that of course was another deflection.  What she said next changed my whole perception of who I was, or as she put it ‘who I had allowed myself to become.’  Her point was that I had married at 23 and never really had a chance to grow up sexually. She of course would have taken me under her corset at the drop of a sock!

She told me to look at every woman who passed me as we walked our coffee off.  “Look into their eyes and smile slowly,” she said. “Watch their reaction.”  I did as she asked and didn’t get much response from the first half a dozen. One old lady winked at me which was cute I thought!  Then a lady walking a dog came into focus and she looked right at me, in fact she looked right into my eyes, and smiled.  I have to say that my reaction was quite startling. I had a physical reaction that made my stomach jump. “Told you,” said a voice next to me. “She would looovvve to take you home.”  I just laughed, however, for the next half an hour we walked around and I visually interacted with complete strangers.  With each positive response I grew slightly, both in confidence and height; well maybe not height, but you get the picture I’m sure.  I became self-aware, and that was dangerous.

In the years that followed I built on that positive response and changed job roles 3 times and in a voluntary military role was promoted 5 times over as many years.  Being self-aware is a powerful thing and can open many doors if used correctly. It can be seen as borderline arrogance in the hands of an arse, however, I have a calm exterior and that worked for me. I usually got what I wanted eventually and loved the thrill of the chase, that feeling when you know your plan has come together.

Being a Dom requires a lot of self belief. In fact without it you end up second guessing everything and preempting the outcome of conversations that will never take place. Self belief gives you the armour to ask previously embarrassing questions, receive answers that you would like to avoid and allows you and your sub to grow. I lost my self belief some time ago and only today did I realise what it was like to recognise it again.  Today I applied myself to a task that I thought was beyond my skills. I planned it, asked Missy for help, altered the plan and stuck at the project all day until it was finished.  I don’t exactly know why this specific thing made me feel different, however, the day started well when Missy asked me to help her with a quick photo shoot. I think her self-confidence in doing something that she would normally internally argue with put me in the right frame of mind. She also looked fantastic which also had a physical effect!

So sitting back in the college canteen drinking coffee and watching the flora and fauna, I realise that these individuals have a possible bright future ahead. They have found the self-confidence to take a step into a strange world of advanced education and then hopefully into a career that makes them happy. That’s the dream I have for my kids, to be self-aware, confident and knowledgeable, and not to wait for some strange woman to walk them round a shopping centre smiling at strangers looking like mad Cheshire cat!