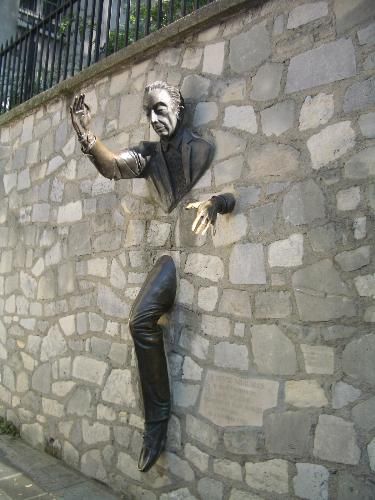 You should try to learn from other people’s mistakes I tell my children. I am also a favourite of telling the aforementioned to learn from your own as well, and that’s where the trouble begins; I don’t do as I preach as often as I should, and oddly enough, neither do a lot of people, do you?

Imagine if you will a wall, a big tall, wide wall. You can’t go round, over or under it. The only way is to pass through it. The wall by the way is your mistake or your error.  You try to tackle it by trying something similar to last time, however, the bruise on your head is evidence that was a bad idea. The next option is to ignore it. If you ignore it you won’t have to deal with it, that sort of thing worked before. However, it’s there, casting a shadow and in all probability it will go away, because all large brick walls go away on their own, don’t they? This one though is part of your relationship and as we already know, you can’t go round, under or over relationship issues,  you have to deal with it. The sensible thing to do is discuss it and find a workable plan; but you don’t do you? You do this ignore/have a go/get it wrong/ignore/get mad/blame yourself type thing. One of the problems with this is that more walls will pop up and just create a giant maze which you get lost in. Maybe this doesn’t sound familiar and you have everything sorted and squared away, however, maybe some of you have a wall right in front of you right this minute, and that’s okay, it’s normal!

I very recently said that I write posts that are not very uplifting or positive, and I don’t mean to do this as my thing; I’m certainly not the D/s version of Morrissy and definitely not as talented as a song writer. My personal highs are my own, our own in fact. I could write, ‘missy orgasmed so much she couldn’t walk for two days, or I had the best erection of my life,’ but neither of those are going to make you think, unless of course either of those graphic descriptions make you think that you should stop reading! I write about real things that everyday Doms face. For example, I have a Twitter account, and on it I started to get lots (a few) followers who wanted me to connect. They were Alpha Male and they wanted me to drink a can of ‘Man-the-fuc-up,’ go shoot some creature in the woods and wolf whistle at girls in the titty-bar, because that’s where girls should be, right? Don’t get me wrong here, they are probably nice guys, with nice families and do jobs that benefit the wider community, and praise the Lord for that, however, don’t measure me by those standards. I once spent time in India working and whilst there a man came and cleaned my hotel room each morning. I had seen him in the hallways and i always smiled and said hello. One day I arrived back early from breakfast and he was mid-clean. The guy was beside himself with embarrassment that I should find him in my room and interrupting my day. I remember trying to put this man at ease and asked his name (which incidentally I have forgotten) and then asked how long he had worked at the hotel. I think he thought I was some hotel inspector by his mannerisms so I asked him if he had family. His face lit up and said he had one son and two daughters. He was obviously very proud of his family, and why not? I told him I had (at the time) four sons. He produced a great big smile and clapped his hands excitedly. “Oh you are a very great man to have been blessed with so many sons.” He said. Here was a guy who cleaned rooms in a five-star hotel for a fraction of what I earn an hour and yet two men stood in a room and we discussed family, and on top of that, my worth was being measured not by ego, job position or as a hotel guest, but by my children. I’m not too sure why I recalled that story, and yet it somehow seemed a good example of what people aspire to in life and what they think is important to be a man’s man. My fours sons, who are now part of my growing tribe of two daughters and five sons are no measurement of my manliness, after all, I did very little in their creation! I am, however, their version of what a man can be like. They see my ups, downs, faults and good points becasue I don’t jug large quantities of ‘man-the-fuc-up’ and pass it off as good behaviour.

I suppose my interaction with my new Indian friend highlighted a difference in cultures, and on occasion I see the interpretation of what it means to be a Dom driven by culture. That is not to say one culture has the monopoly over being a good Dom, that after all is down to what works with your dynamic.  First and foremost a good Dom is a good person. Someone who thinks of others and where possible goes beyond what is required of them. It is about being a good example as a human being. So when we are faced with problems, like our brick wall (it’s still there by the way) do we not demonstrate a good example of collaboration?  I am quite sure when you are at work and an issue crops up, you don’t lock yourself away in the bathroom until you have solved it. You seek support and advice. You have a meeting, drink coffee, thrash it out and agree on plan. You’re day is sorted!  At home though, maybe you don’t adopt the same process.  Take your problem to your sub, who after all is your business partner of sorts, pour some coffee, sit down, talk about it, come up with plan. Already I can hear the bricks falling away!

Now please don’t confuse my ramblings as a lecture. I am far from  perfect in any sense, and in fact, my writing about such things helps me to sort issues out in my own head.  My final words on the subject is this; you can’t be a Dom on your own, it’s takes two (or sometimes three or four) and the other person is key to your success and deserves an input. Don’t stand with your back to the wall with your eyes closed hoping for the best. Most people who do that usually hear the words, Ready, Aim…………!